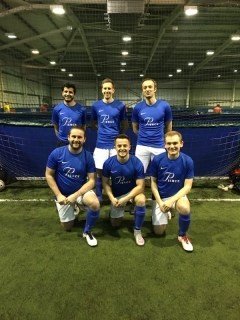 Team members Jimmy King, Jimmy Moore, Lewis Withnell, Adam Zinga, Daniel Burrows and Charles Hopkinson won the league following an unbeaten run in all 10 games of the season. Their win means they will receive automatic promotion to Division One next season.

Organiser Lewis Withnell, Trainee Accountant at Pierce said: “We started playing in the league as a bit of fun, for team building and to keep fit.

“We’ve really enjoyed our first season and it’s the icing on the cake that we won the league after winning every game. We’re really looking forward to next season now and hoping we can have a repeat performance.”

Ben Smith, Director at Pierce added: “We’re really proud of Pierce FC’s achievements this season. We actively encourage our staff to keep fit and it’s even more fun when you can do this with your colleagues.”